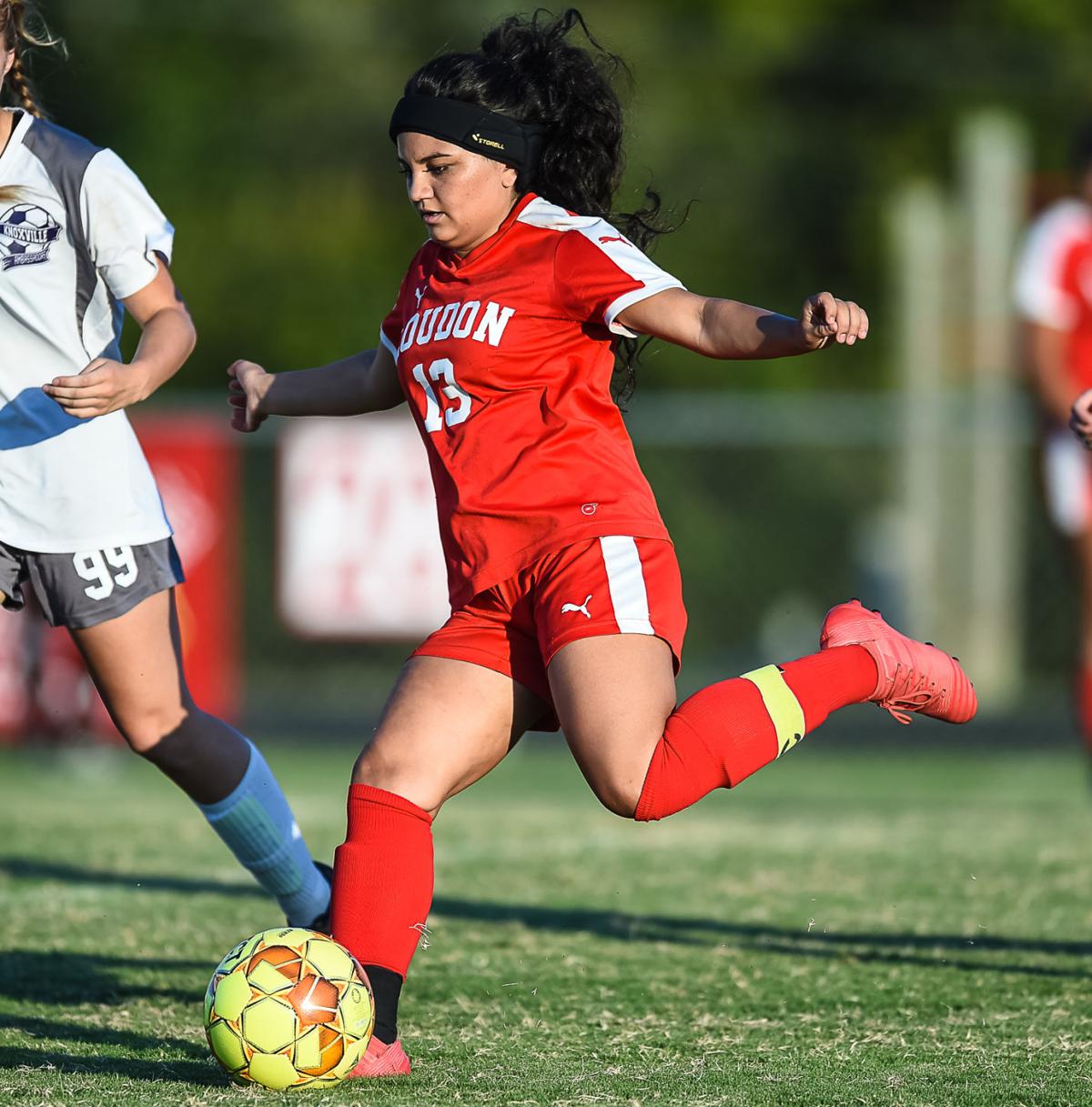 Loudon High School’s Kenia Valdizon makes a pass earlier this season. Valdizon finished the season with 39 goals and is the 2019 All-County Player of the Year. 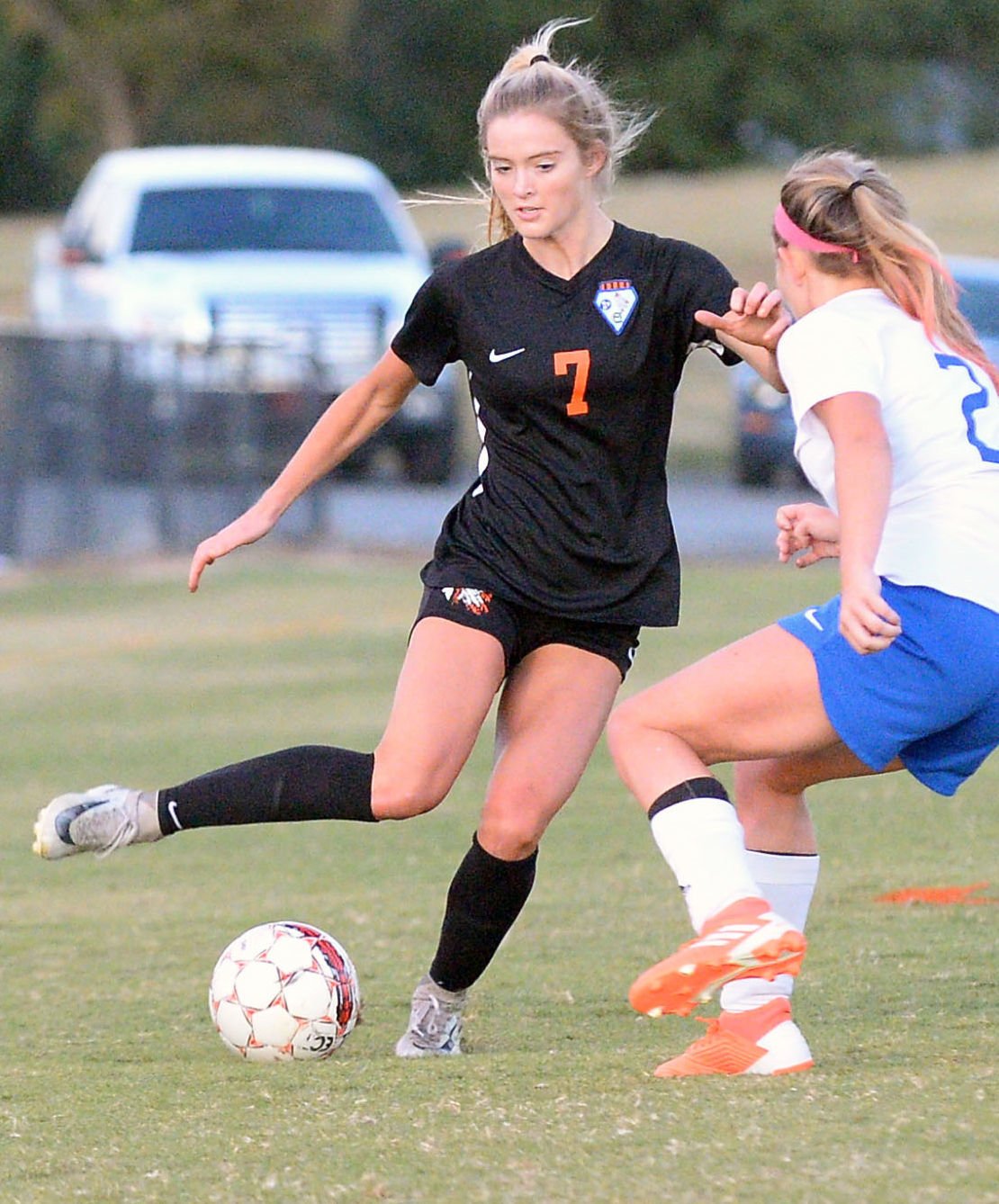 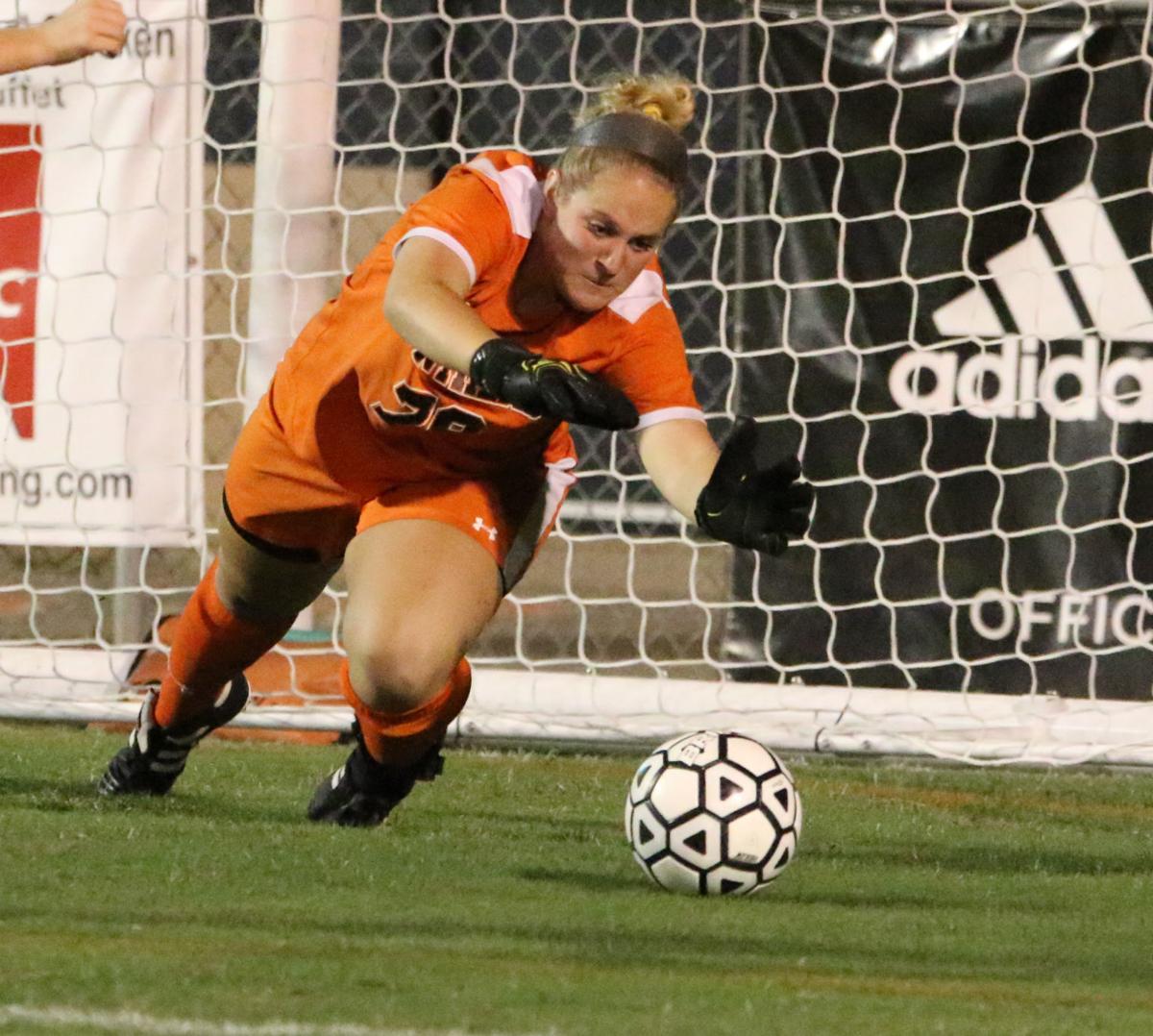 completes a save during a match against Carter High School. 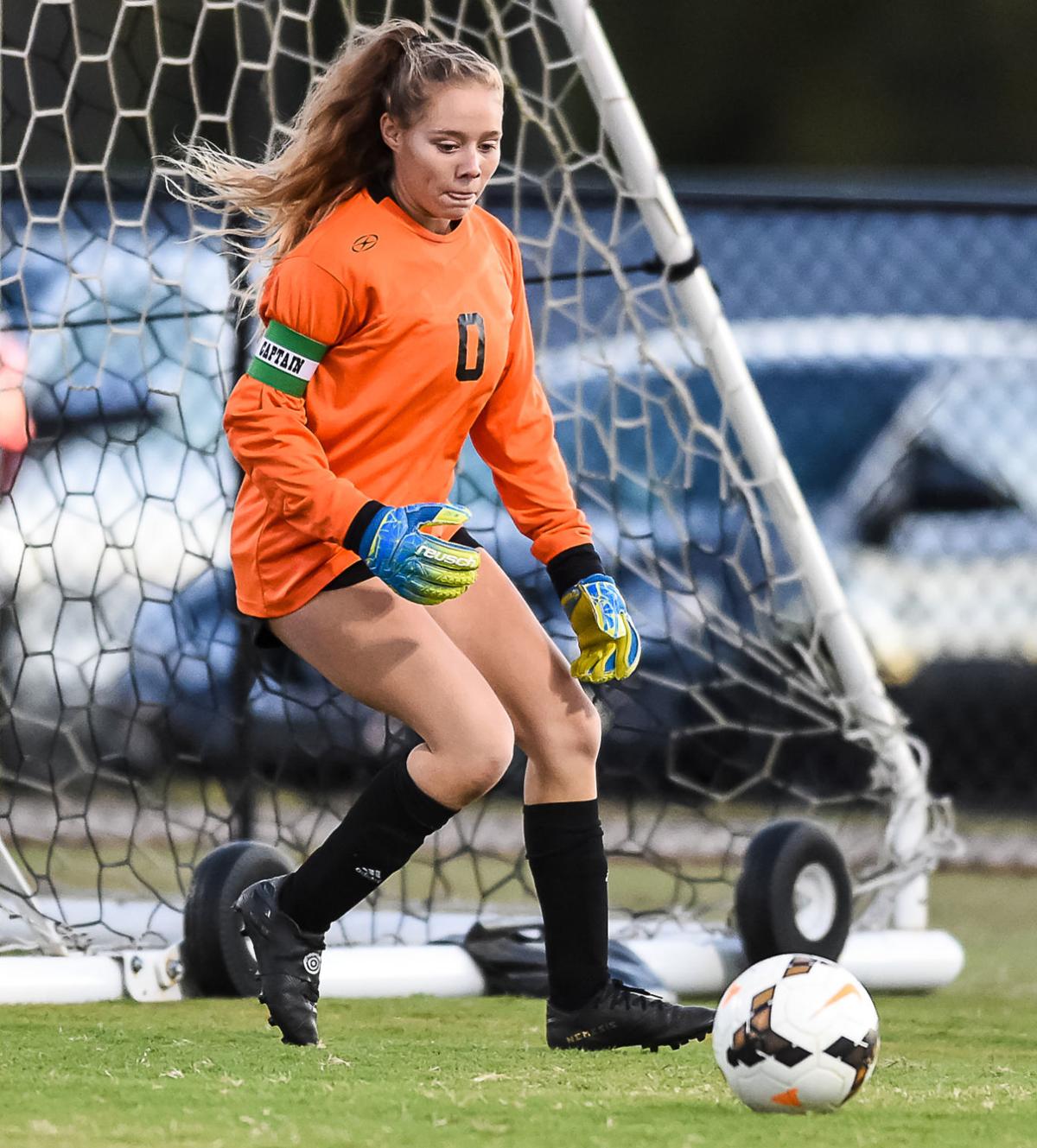 Greenback School goalkeeper Angelita Astudillo makes a save during a match against Cumberland Gap High School. 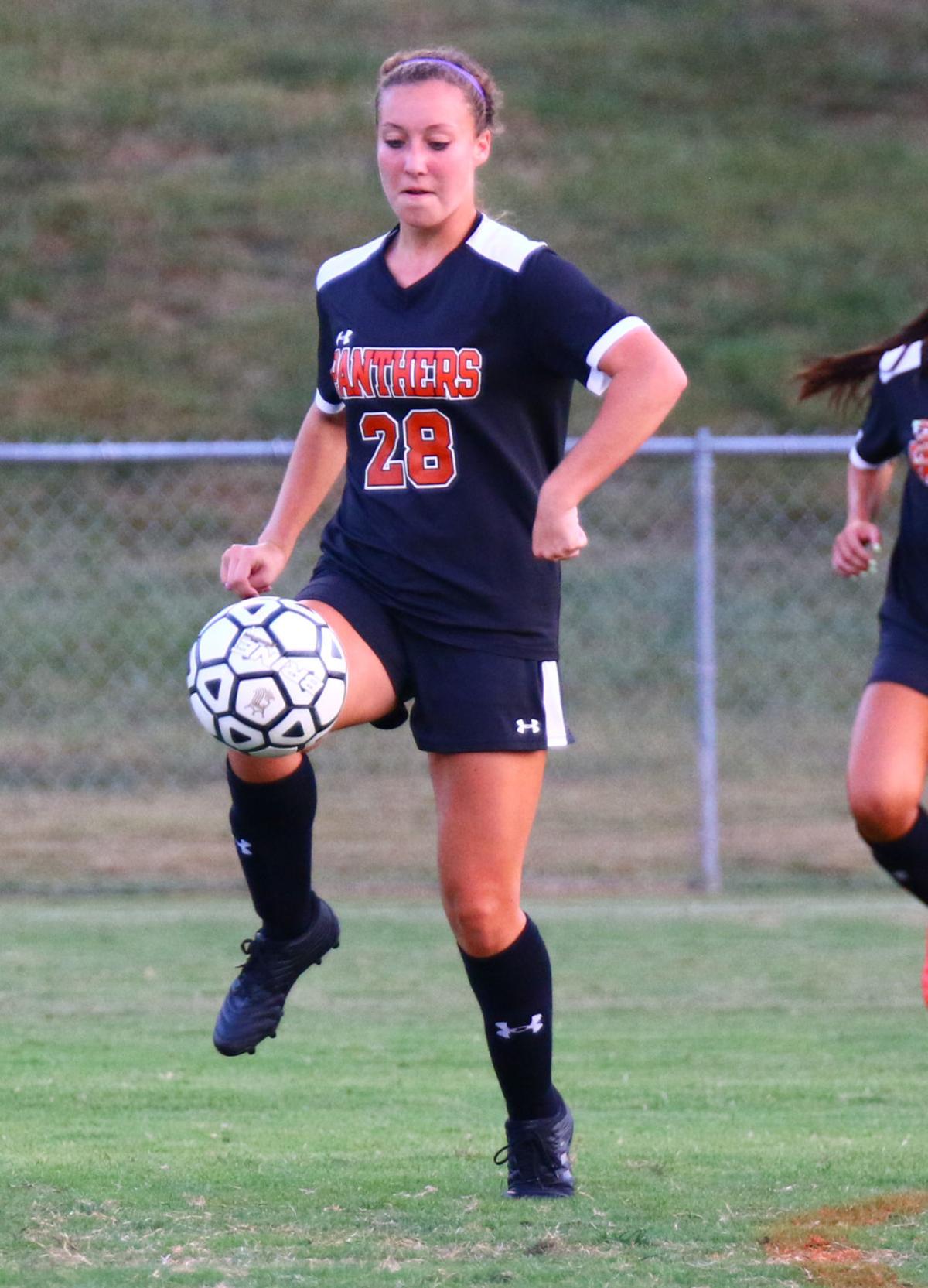 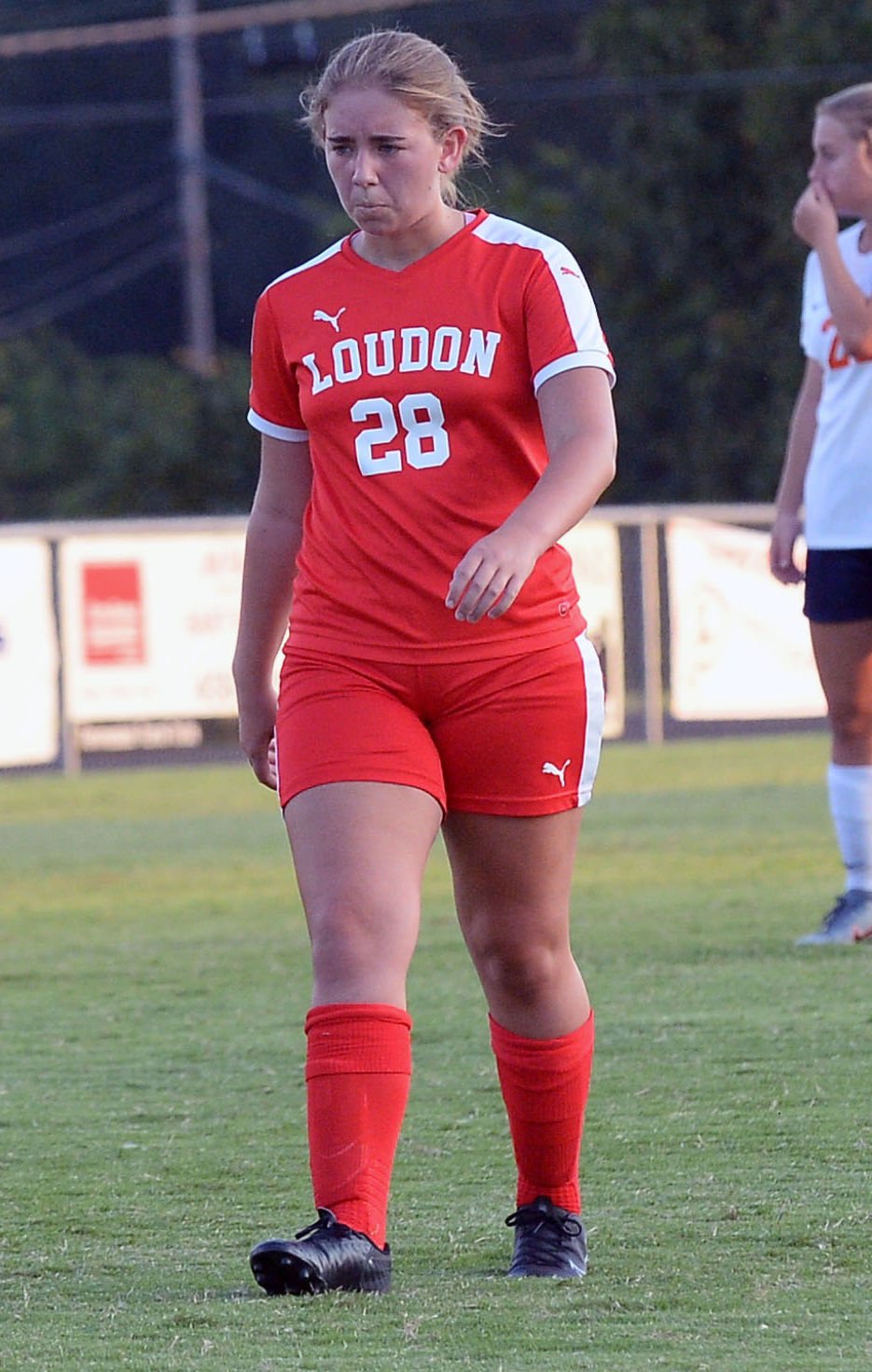 Loudon High School's Abby Brooks steps on the field prior to a match against Roane County High School. 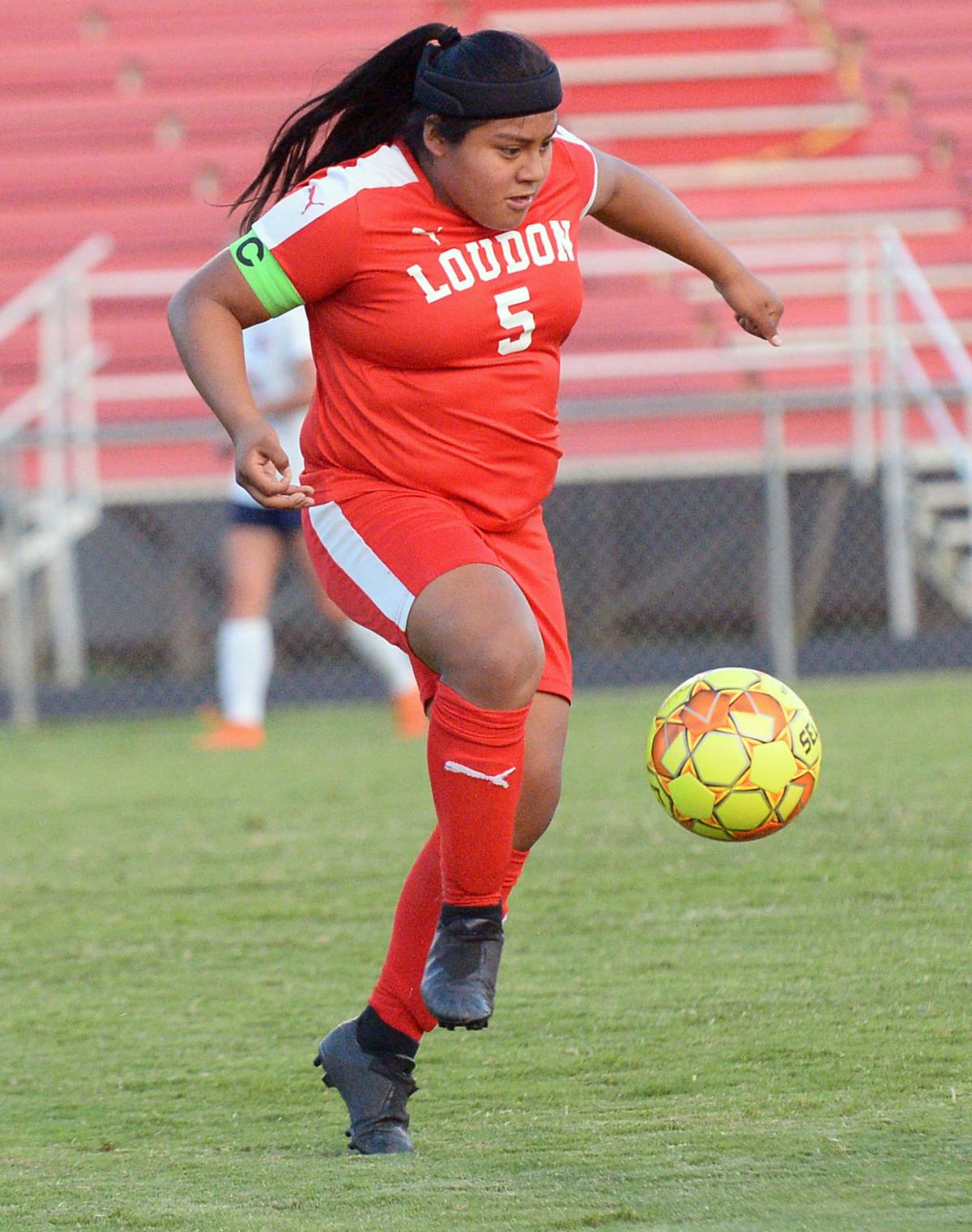 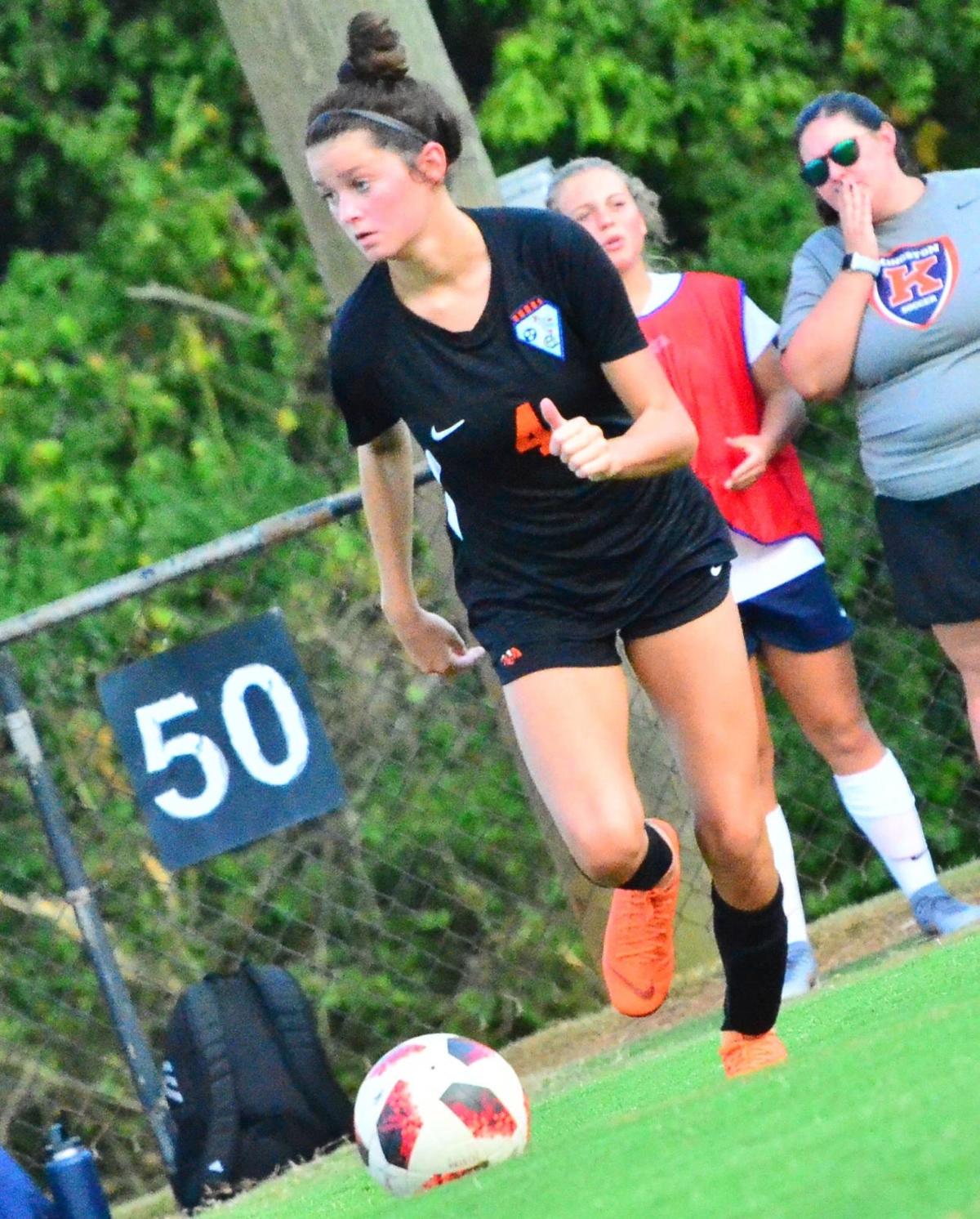 drives down the field during a match against Roane County High School. 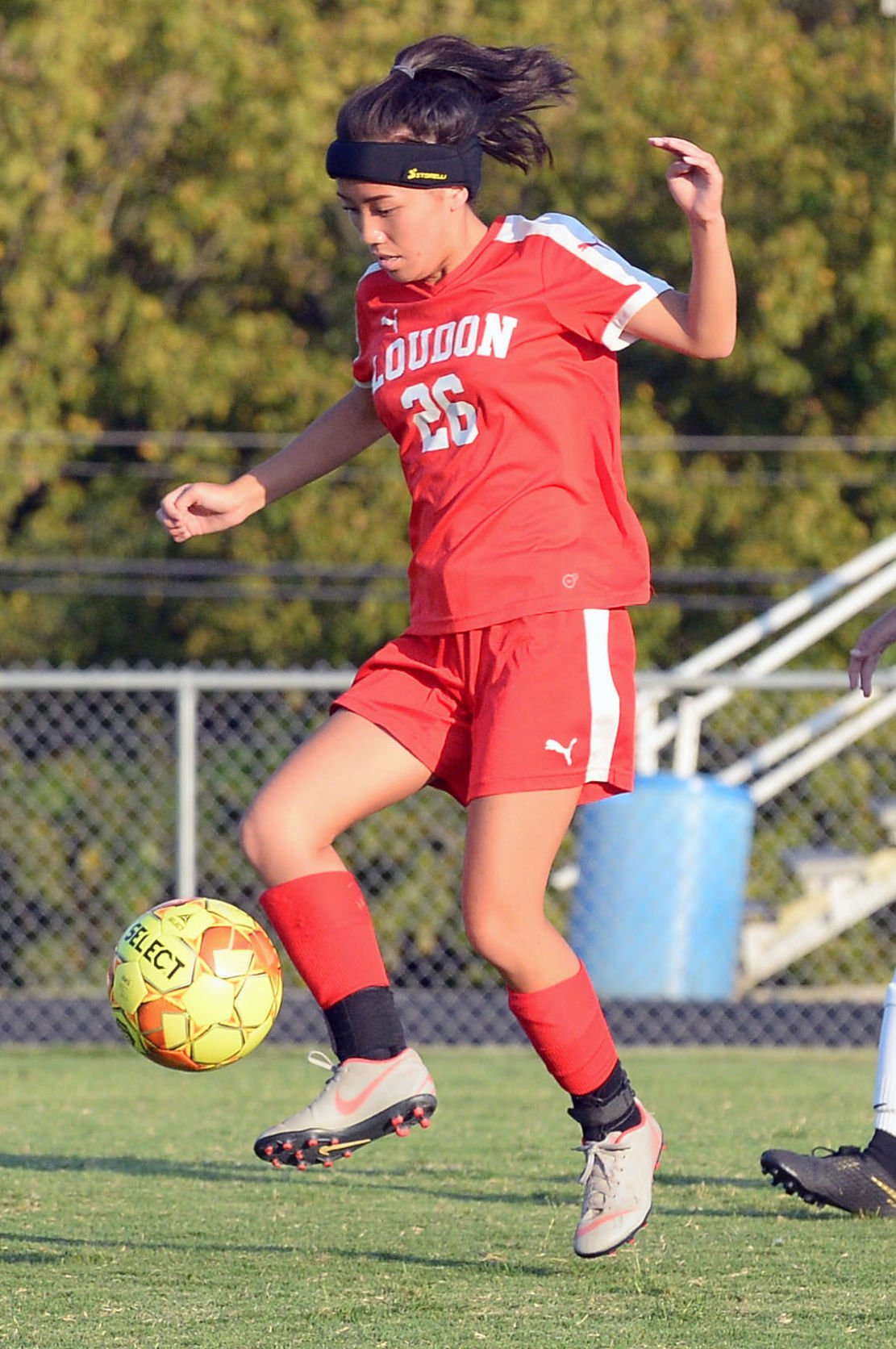 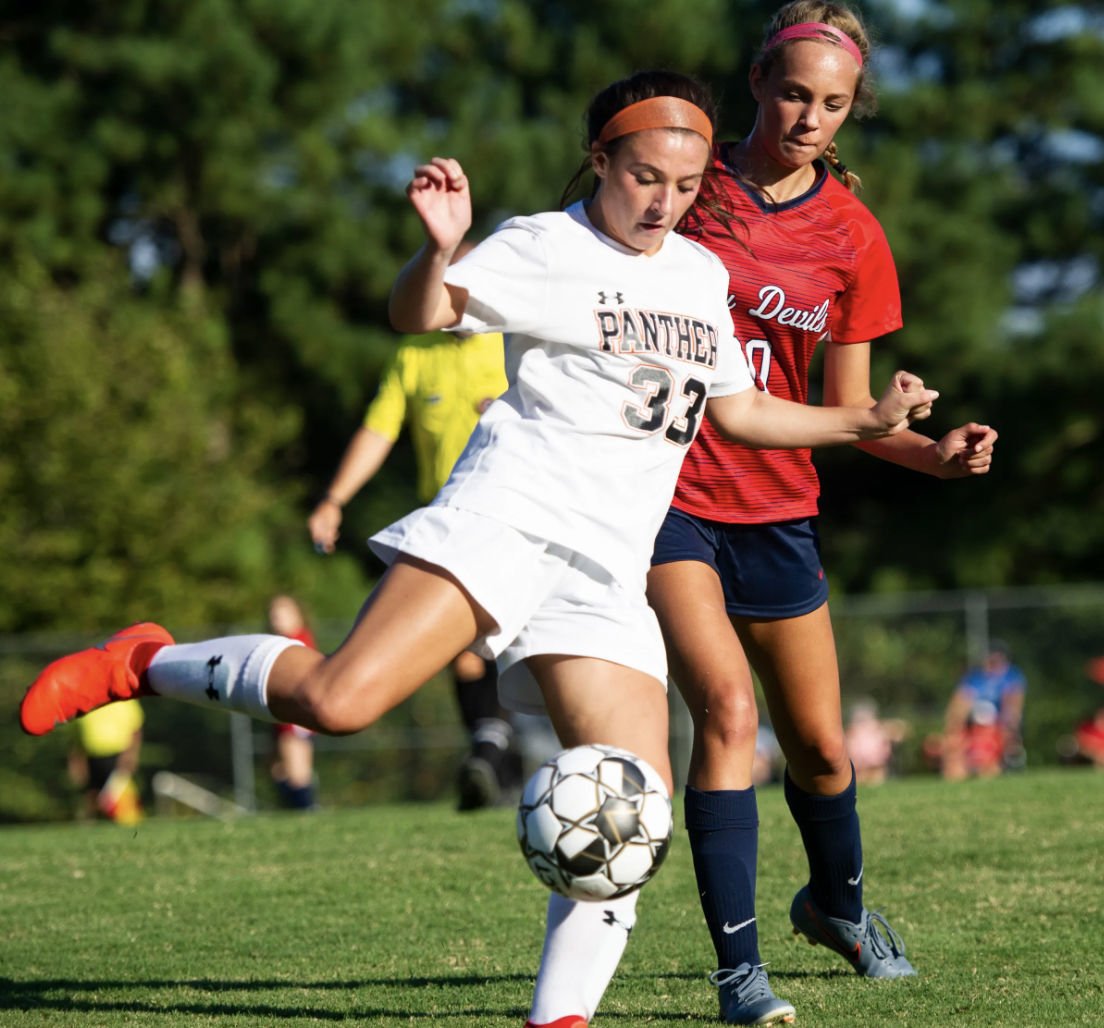 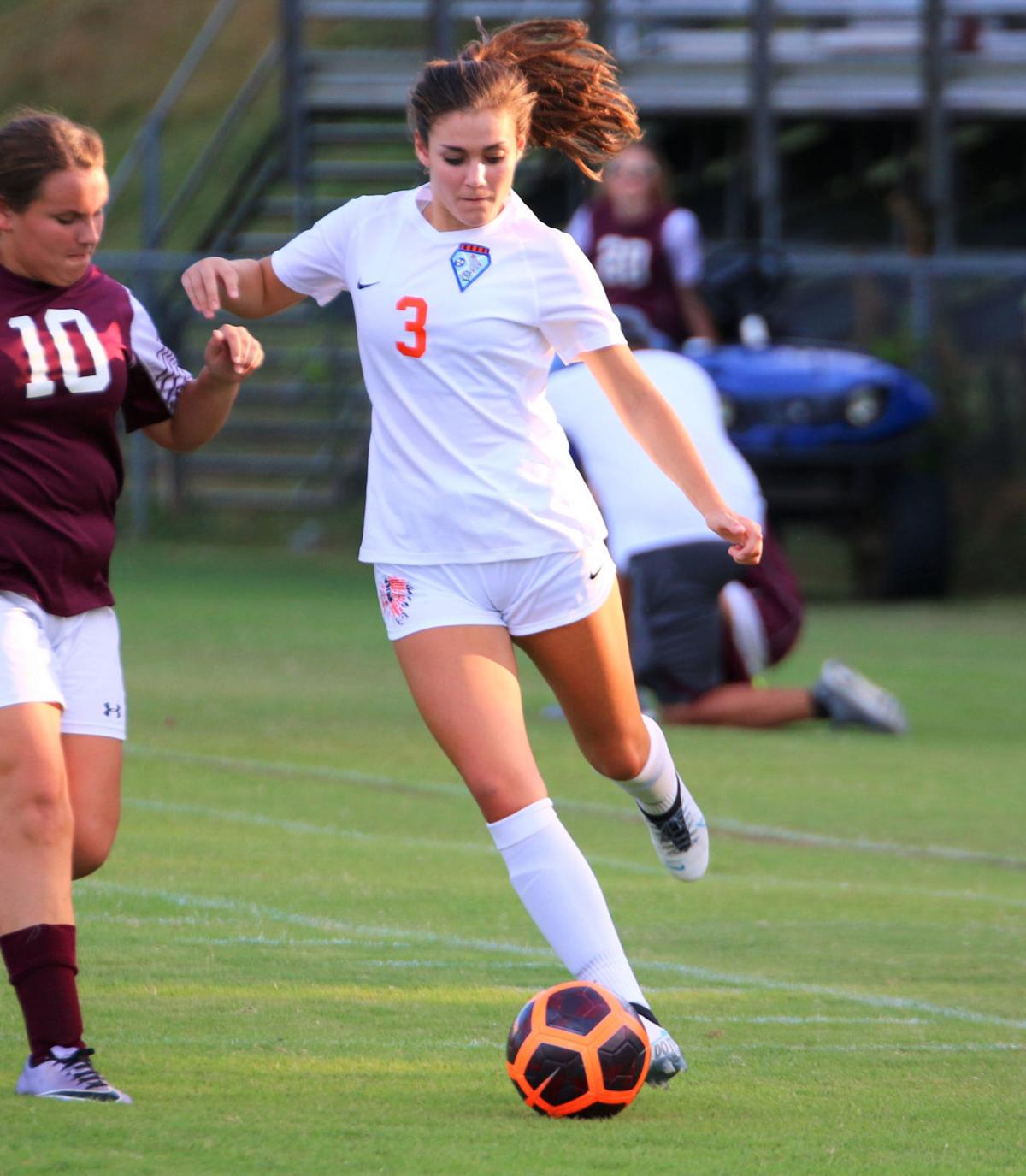 Greenback School’s Jenna McConnell races past a defender during a match against Fulton High School. 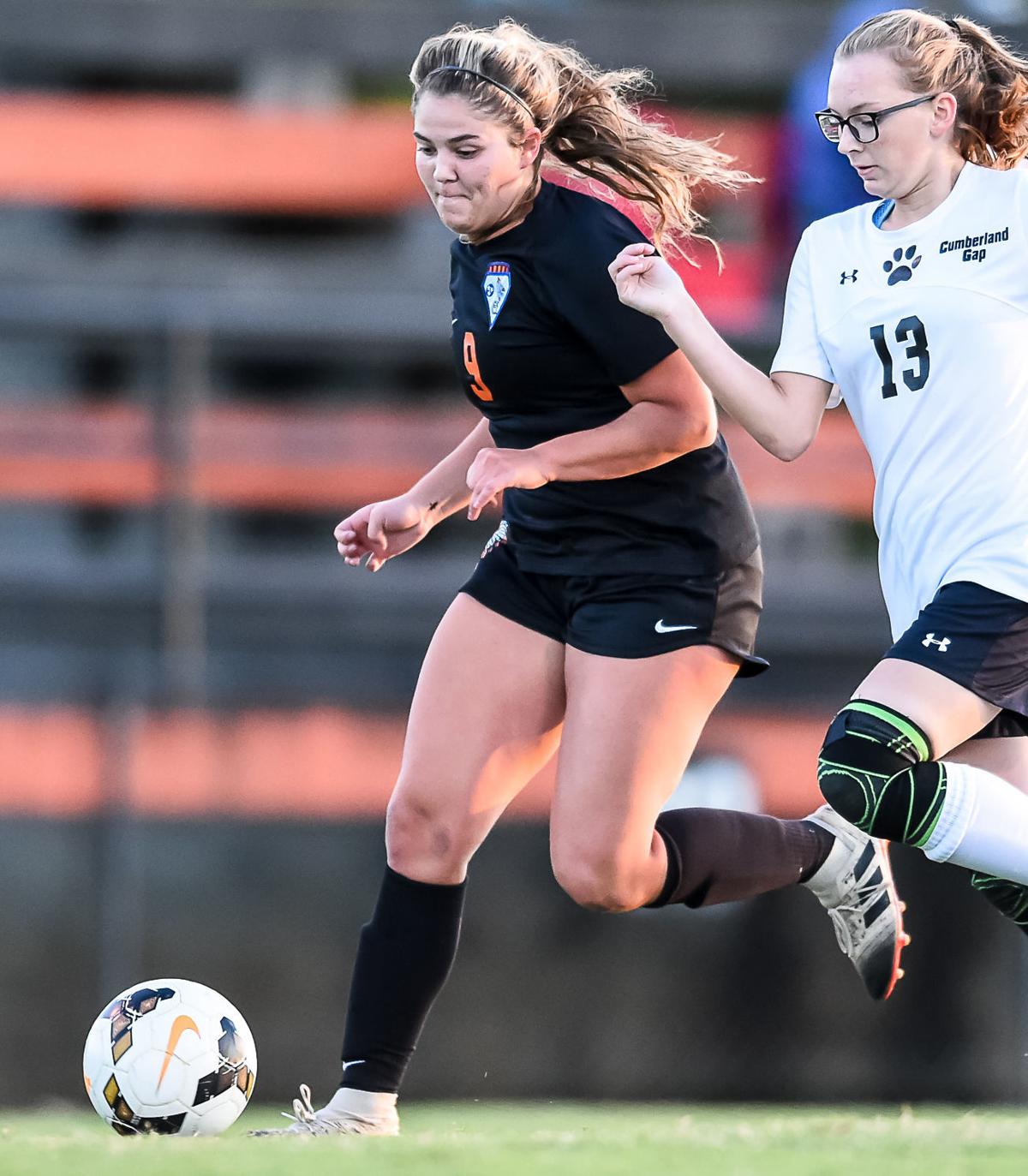 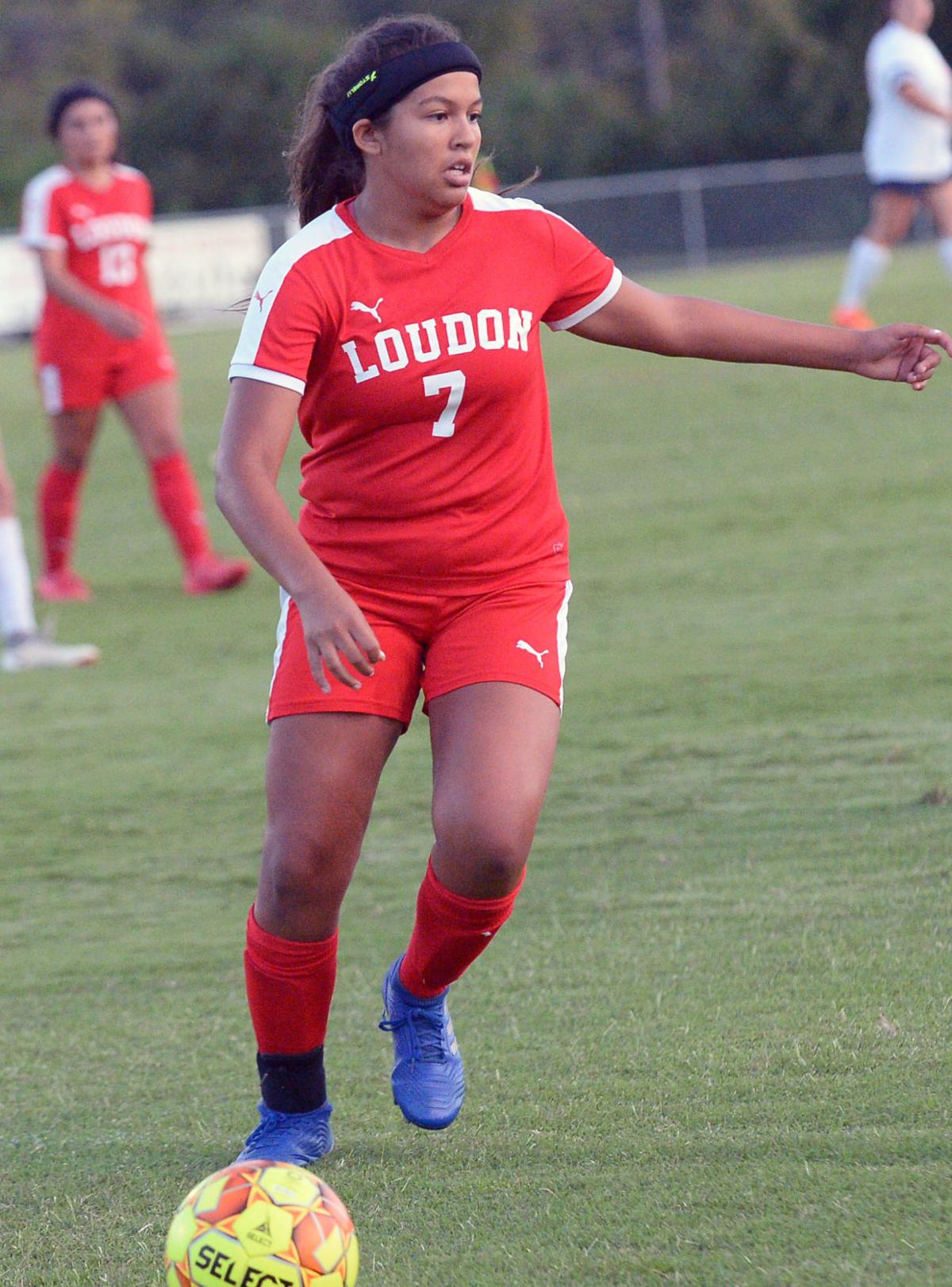 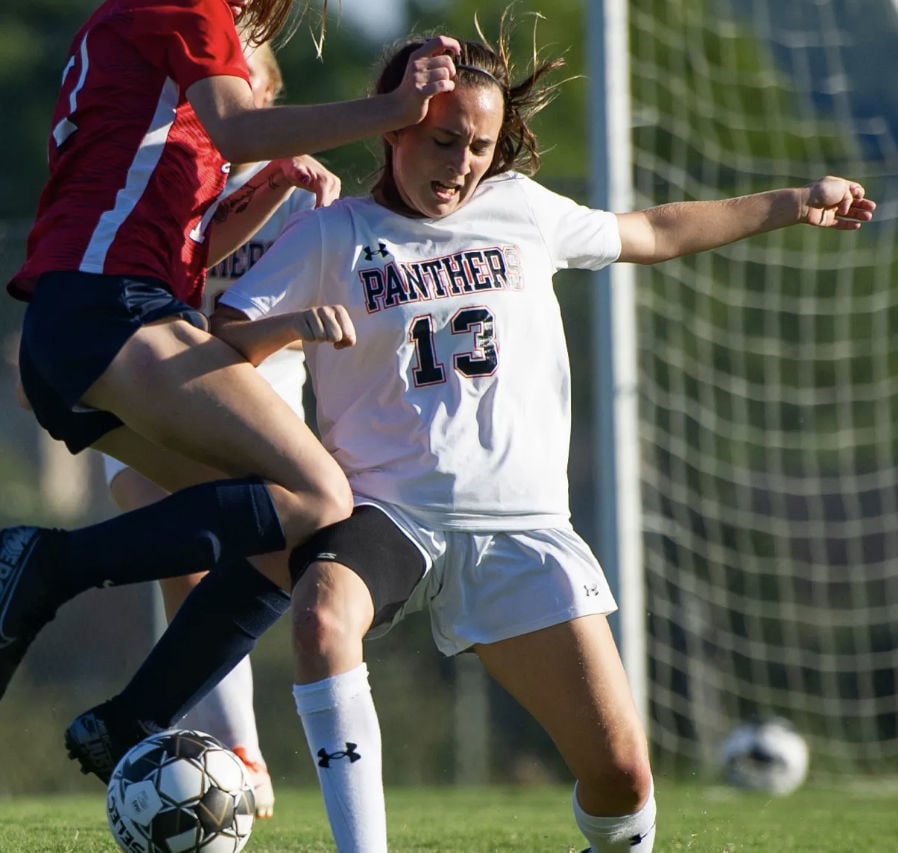 Loudon High School’s Kenia Valdizon makes a pass earlier this season. Valdizon finished the season with 39 goals and is the 2019 All-County Player of the Year.

completes a save during a match against Carter High School.

Greenback School goalkeeper Angelita Astudillo makes a save during a match against Cumberland Gap High School.

Loudon High School's Abby Brooks steps on the field prior to a match against Roane County High School.

drives down the field during a match against Roane County High School.

Greenback School’s Jenna McConnell races past a defender during a match against Fulton High School.

The All-County Girls Soccer Team is chosen through a combination of statistics, personal observation and coaching suggestions. Final decisions are made by News-Herald sports writer Nick Davis. He can be contacted at 865-635-0841 or nick.davis@news-herald.net.

Kenia Valdizon burst onto the scene as a freshman two years ago for the Lady Redskins and quickly developed into the top player in District 5-2A and one of the best in Region 3-2A.

Valdizon is the 2019 All-County Player of the Year.

The 2018 All-County Player of the Year continued where she left off and had another phenomenal season at midfielder for the Lady Cherokees.

She totaled 167 shots and led the team with 32 goals and eight assists, with six of her goals serving as game-winners. Fox started all 19 games this season and played a key role in helping the Lady Cherokees capture their first district title in 10 years.

Fox was named the District 4-1A Offensive Player of the Year and was named to the All-Region 2-1A team.

Williams recorded more than 350 saves during her high school career and played a large role in helping the Lady Panthers achieve their first winning season since 2011.

She was named to the All-District 4-3A first team and was the runner-up for District 4-3A Defensive Player of the Year as a goalkeeper. Williams is committed to Milligan College.

The senior goalkeeper had a breakout season for the Lady Cherokees and was crucial in coming up with multiple saves against Polk County High School to clinch the District 4-1A title.

Astudillo recorded 171 saves, giving up 30 goals on the year for an 85 percent save percentage. She earned six clean sheets and started in 18 games as a team captain.

Abby Brooks proved one of the best players in District 5-2A this season and served as a team captain for the Lady Redskins.

Brooks started in all 15 games as one of the team’s primary defenders. “She is technically sound, physical and tough as nails,” Sam Harrison, LHS head coach, said.

Brooks was named to the All-District 5-2A and All-Region 3-2A first teams. She was also named the team’s Co-Defender of the Year.

Sydnie Cziep has been one of the most dynamic players for the Lady Panthers the last three seasons and put up honorable numbers this year.

The junior split time between midfielder and forward, leading the team with nine goals and adding eight assists. Cziep was selected as the team’s Offensive Player of the Year.

Jenifer Nicolas played a major role for the Lady Redskins the last four seasons, especially as a defender.

Nicolas started in all 15 matches and her physical ability proved a tough matchup for opponents. She was named to the All-District 5-2A and All-Region 3-2A first teams, as well as being named the team’s Co-Defender of the Year.

Greenback head coach Rob Fox knew Kierra Bishop was a special talent the moment she stepped on the field as an eighth-grader two years ago.

She has quickly grown into one of the best overall athletes in Region 2-1A and is credited for helping develop the Lady Cherokees’ stingy defense this season. Despite starting as a defender, she finished the season with nine total shots, two goals and two assists.

Bishop was named to the All-District 4-1A and All-Region 2-1A first teams.

Michelle Moua’s aggressive play spoke louder than her quiet demeanor this season for the Lady Redskins.

She started every game as a center midfielder and really came on toward the end of the season with goals against the Rockwood High School Lady Tigers and the Knoxville Ambassadors.

“Michelle was a big reason for our successes this year, and she was still growing exponentially as a player,” Harrison said.

Moua was named to the All-District 5-2A first team and All-Region 3-2A second team.

Emily Lowe has gradually improved over the last three seasons and stepped up as a team leader this year for the Lady Panthers.

The junior midfielder scored eight goals and added two assists en route to helping Lenoir City advance to the District 4-3A semifinals for the first time since 2008. Lowe was named the team’s Most Improved Offensive Player.

Jenna McConnell made the transition from defense to midfield early this season, and the move paid off in a big way.

McConnell became one of the team’s most dominant possession players and recorded 27 total shots, including two goals and four assists. She also scored the game-winning, sudden-death goal against Polk County High School to win the District 4-1A championship.

McConnell was named to the All-District 4-1A and All-Region 2-1A second teams.

The senior forward and team captain started in 13 games and finished second on the team with 37.5 shots and 9.5 goals.

“Anna was almost always in position to pressure the goalkeeper and clean up loose balls,” Rob Fox said. “Her aggression forced the opposition to account for her, which gave us more room to work in the midfield.”

Khalil Tate on why he played hurt, his fit in the NFL, and how he wants to be remembered as an Arizona Wildcat

The Lady Redskins were thin on experience, which led freshman Kaela Correa to step up and become a full-time starter.

Correa started at right midfielder and was effective in her ability to control the ball and extend possessions downfield.

Correa was named to the All-District 5-2A second team and is the team’s Rookie and Midfielder of the Year.

Chloe Hill has been a solid four-year player for the Lady Panthers and will be missed next season.

Hill served as a team captain and started in all 19 games as a defensive midfielder and center back.

Layla Brogdon’s versatility was evident dating back to her three years at Lenoir City Intermediate/Middle School as a multi-sport athlete.

Her hard work and determination led to her earning a spot on the varsity roster as a freshman and she played well in the opportunities given. She finished the season with six goals and three assists.

Brogdon was named to the All-District 4-3A second team and was selected as the team’s Offensive Newcomer of the Year.

After picking up a soccer ball for the first time as a freshman, Medina developed into a complete soccer player and started as a left midfielder this season.

Medina was named to the All-District 5-2A second team.

Hadil Salem was a freshman that stepped into varsity action this season for the Lady Panthers and produced immediate results.

Salem finished the year with eight goals and three assists, including a game-winning free kick against Sevier County High School.

McKenzie Wilhite and Maeley Nixon proved a dangerous duo that started in all 19 games at center back.

They both contributed to the lowest number of goals allowed since the 2011 season and were named the team’s Co-Defensive Newcomers of the Year for their efforts as a tandem.