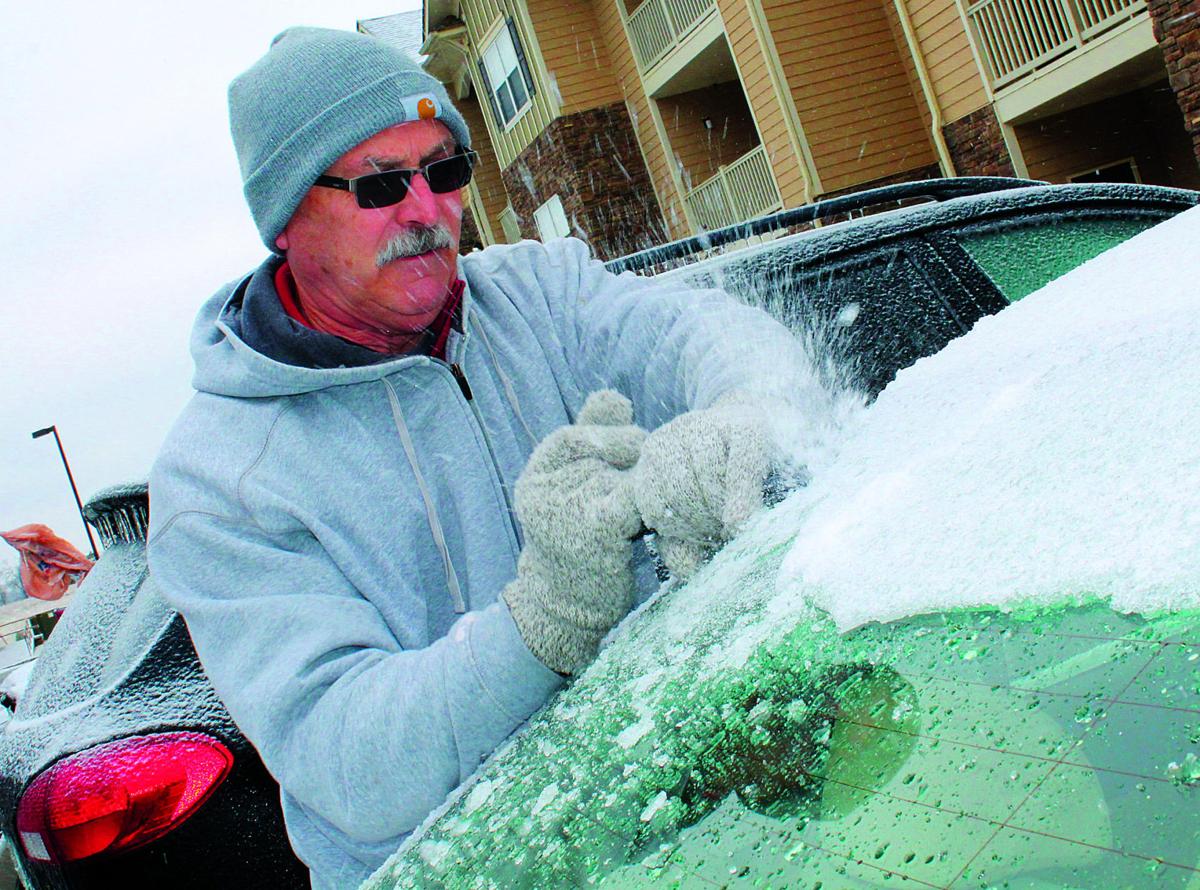 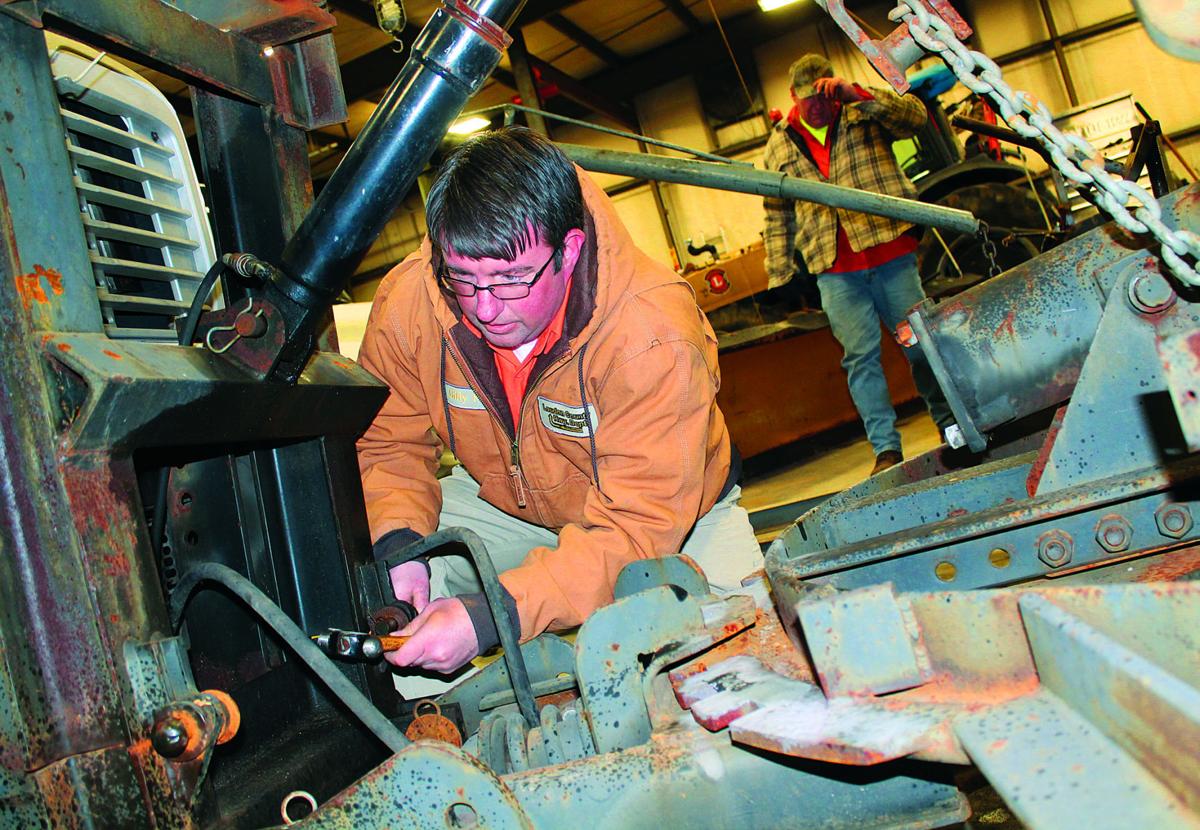 Loudon County Highway Department General Foreman Billy Pickel rigs a plow to the front of a truck Sunday afternoon in preparation for a winter weather storm that swept into the area Monday, blanketing all of East Tennessee with snow and ice.

Loudon County Highway Department General Foreman Billy Pickel rigs a plow to the front of a truck Sunday afternoon in preparation for a winter weather storm that swept into the area Monday, blanketing all of East Tennessee with snow and ice.

Loudon County Highway Department Superintendent Eddie Simpson said road crews worked throughout the night Monday and into Tuesday to clean up an estimated 300 downed trees from roadways. Simpson said the main problem with this winter storm has been ice-covered trees blocking roadways and snapping power lines.

“That’s been our major problem, but, of course, the ice, like I say, once it got the temperature down to where it was down to 20, 25 degrees it doesn’t do any good to try to melt it anyway because it just freezes right back,” Simpson said. “And so because of that we concentrated mostly on the trees and getting people power back.”

Several areas did see some icy road conditions, Simpson said, especially in the northern end of the county.

“The ice is going to refreeze once we melted it anyway, so we worked on trees mostly last night,” Simpson said. “That’s what we are going to do (Tuesday) morning. Once it starts warming up enough that we feel like that we could get the ice out of the way then we’ll work on that.

“We processed probably I would say four times the amount of calls than we typically run in a day,” Estes said about calls to the E-911 center Monday. She added that dispatchers were still “quite busy” throughout the day Tuesday.

“The problem is every time we get a wire up something else happens down the line,” Littleton said. “It’s going to be a couple of days before we get power totally restored for everyone. It’s a bad situation.”

OH: DOG RESCUED FROM FLOOD WATERS UP FOR ADOPTION

Loudon Public Works Director Bill Fagg said residences were still without power Tuesday morning throughout the city of Loudon and Tellico Village due to downed trees, adding that for the most part the roadways in the city of Loudon were passable with few patches of ice. Several roadways remained closed due to the downed trees, including River Road, College Street and “the biggest part” of Corporate Park Drive.

“They’ve got power out everywhere — Tellico Village, all around down the city of Loudon where the tree limbs have popped them out,” Fagg said. “They will (be without power) for a while.”

Schools in Loudon County were closed Monday for teachers and staff professional development sessions and again Tuesday and Wednesday due to weather.

“We’ve had a few people out on the roads and our first thought is to make sure everyone is safe, and so we just think that these days are built in so that we can have this opportunity when inclement weather comes,” Lenoir City Schools Superintendent Jeanne Barker said Monday afternoon. “We believe this is an opportunity to use one of those days.”

While Lenoir City Schools closed one day and Loudon County Schools closed for two due to widespread illness several weeks ago, both district directors say there are plenty of snow days left in the remainder of the school year. Staff at both districts, however, will have to make up Monday’s closure.

“We used one for illness, but last year we had used — by this time I think we had used six or seven days, so we’ve had a much milder winter this year,” Barker said.

Loudon County had already used two days due to illness and also had delayed opening earlier in the year due to inclement weather.

“Really this has been a pretty good year in comparison to last year. Last year by this time we had been off several more days. To date this is the first snow day that we’ve actually used, and this time last year I know we had used four or five, maybe more than that,” Loudon County Director of Schools Jason Vance said Monday afternoon. “We actually used eight or nine combined total last year. We’ve not hardly used any as compared to last year.”

“We didn’t feel like it was appropriate to have buses or high school drivers on the roads in these conditions tomorrow morning,” Vance said. “That was the ultimate deciding factor for us. Additionally, I’m worried about just the safety of my staff. I want to make sure that they’re safe. That’s why we decided to close the central office for our staff.”

“We still have some icy patches and there have been several power outages in Lenoir City,” Barker said Tuesday afternoon, adding that additional snowfall was expected overnight Tuesday.