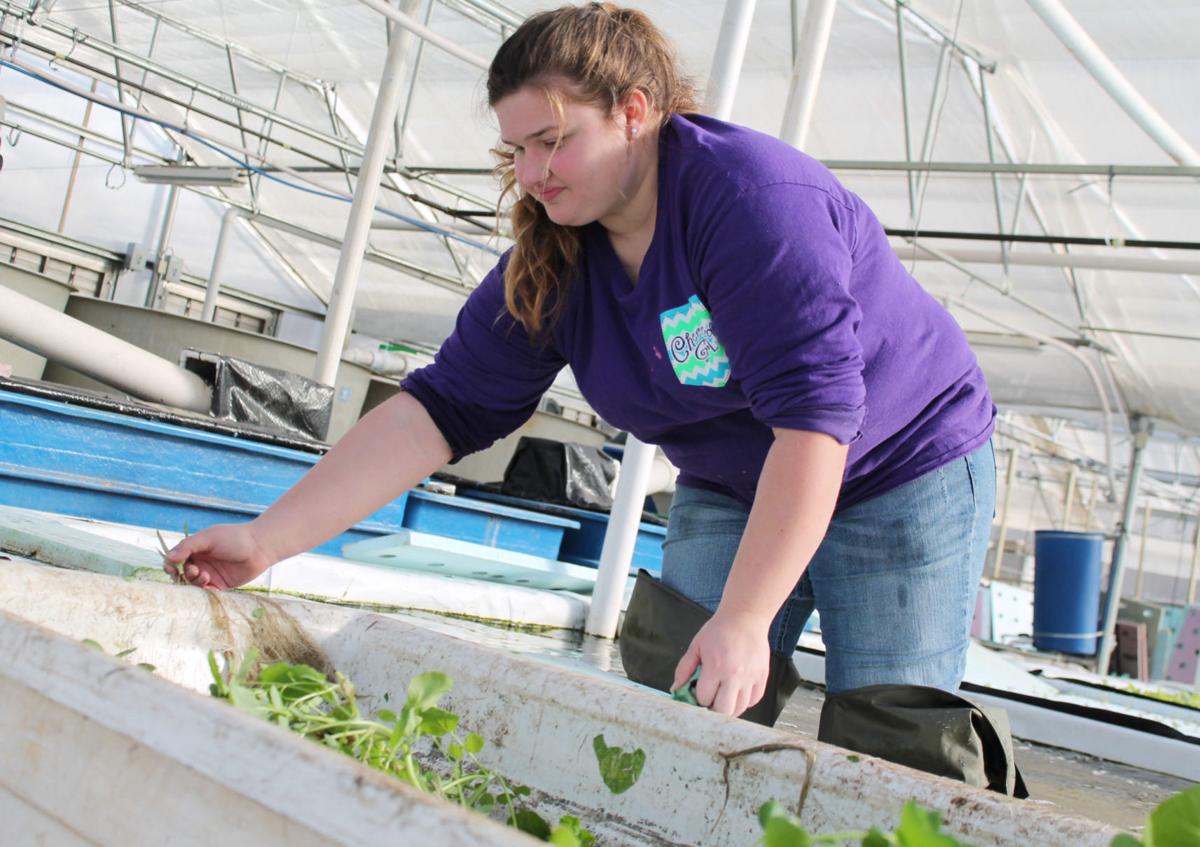 Lauren Watts works in the HATponics greenhouse in Lenoir City. 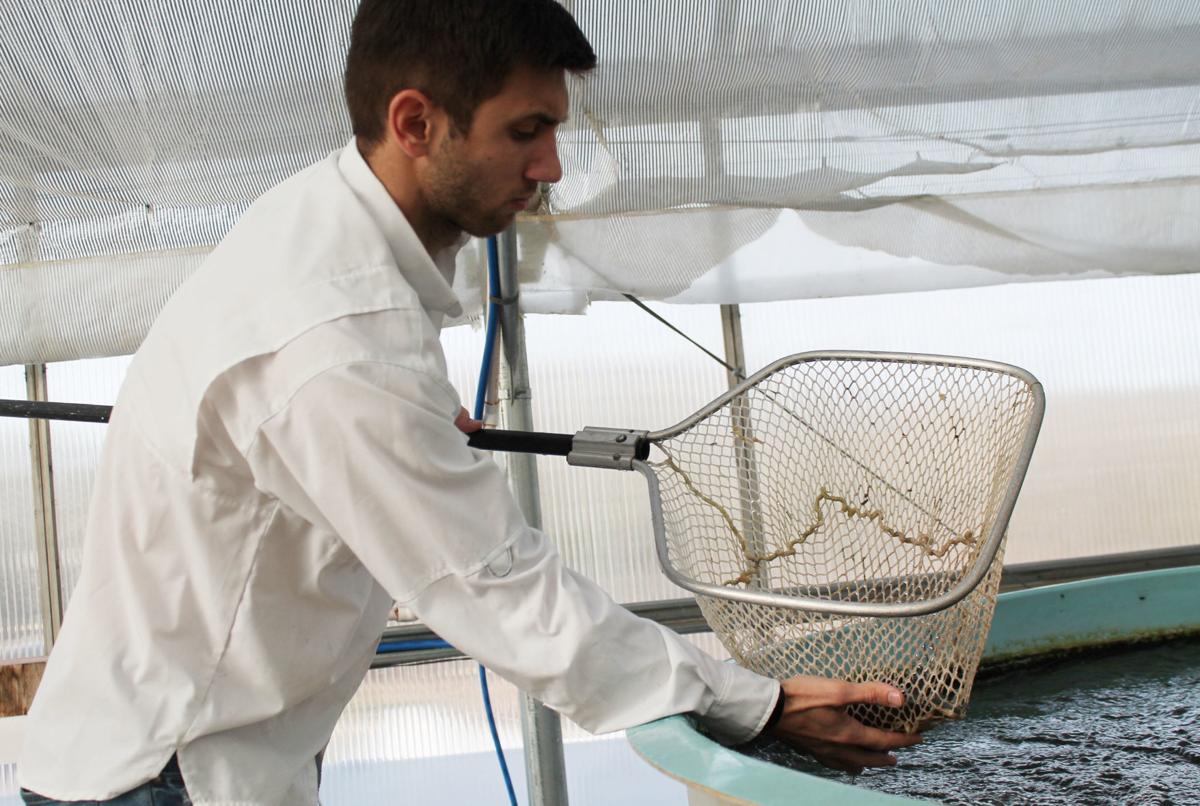 Lauren Watts works in the HATponics greenhouse in Lenoir City.

Founded in 2013, HATponics arrived in Loudon County in 2017 with a mission to help alleviate hunger and poverty by developing sustainable aquaponics systems, serving classrooms around the world and constructing facilities for commercial and local use.

The initial goal was to focus on American classrooms and build small-scale farms with students to “empower them to charge their food supply,” according to the HATponics website.

“The basic premise is that our world is running out of water, so we have to find more efficient ways to use water resources and we need to be very cognizant about our small-scale growing operations to continually feed ourselves,” Ryan Cox, HATponics CEO and founder, said. “So doing that more sustainably with less resources as we have more and more people coming onto our planet Earth is really important. So ideally if we can grow the same plants with less water and continually make income out of that stream, we can create an efficient resource for farmers as well as those that are in need of food resources.”

HATponics uses five acres with 19,000 square feet of greenhouse space off U.S. Highway 321. The basis of operations is a greenhouse featuring 12 fish tanks and a fully automated temperature control system. The property also includes an outside garden and hillsides of blackberry bushes.

“We have our U.S. domestic construction programming that builds sustainable agriculture and controlled-environment agriculture structures throughout the United States — that’s one branch,” Cox said. “We have our engineering services programming here, we have a manufacturing program here, we have an educational program here, and we have obviously our vegetable sales here as well. So by coupling all of them together this became our global headquarters.

“When we moved to Lenoir City we had managed most of our operations out of Chattanooga, and by consolidating everything into one location we have this farm,” he added. “So you’ve got your hydro, your aqua and your terraponics facilities all located in one place with your demonstration greenhouses as well as your full-scale commercial production facilities.”

A big focus is aquaponics because it is the most efficient use of resources, Cox said.

Aquaponics uses waste produced by farmed fish or other aquatic animals as nutrients for plants grown hydroponically, which in turn purify the water.

“Basically these fish live their best lives,” Taylor Fatheree, HATponics director of product development, said. “We provide them with the ideal water temperature, food, everything that they like, and they live a happy life. Essentially all we take from them is their waste. So water gets circulated from them, we scrub it up so there’s a solid waste collector. ... They’re not living out in these big bays, they’re in here (in the tanks). We separate their waste, we convert their waste into nitrates that the plants can absorb and then it gets pumped out into the bays and then recycled. It’s a continual process. Basically the plants are an extension of our filters. So they filter out the nutrients. It’s essentially a whole ecosystem. All we do really is feed the fish. The rest takes care of itself.”

The products are sold at farmers markets in Oak Ridge and Knoxville. Store pickup locations can also be found at www.hatpon ics.com. The food serves as a byproduct of what the group strives to do worldwide, Fatheree said.

Hopes were to feed 20 million people by 2020, but that goal fell short at 7 million. Cox still considers that a success.

He referred to his crew of about 30-50 employees as “mission driven.”

“So that allows for extra hours, it allows for passion-driven projects to be completed by passionate individuals,” Cox said. “It kind of emulates what we do in the greenhouse is we do more with less. Everybody wears a lot of hats around here. There’s not a specific job description for any single employee. We all get in where we fit in to make it work. So you’ve got multiple languages represented, you’ve got multiple talents, you’ve got engineering and sales teams that work together, you’ve got farm teams and sales teams that work together. You’ve got international construction teams that work with project managers and educators who are from around the country. So it’s a collaborative effort to share the knowledge, to change the way the world feeds itself.”

The greenhouse locally serves multiple purposes, including a place for people to have hands-on training.

Jason Blettenberg has been learning since November how to grow plants for his Cookeville farm.

“That gives me the knowledge to work with these guys in every aspect, including going to the Dominican Republic and building the farm,” Blettenberg said. “So that gives me experience and learn what I do and implement it on my farm. ... I don’t have a ton of acreage so that’s kind of why I started it. To me, it’s innovative and it’s the way of future.”

The reach of HATponics spans 35-40 states and locations in Africa, India, Europe and Central and South America. Education is a focus.

“The cool thing about all those operations, too, is not only are we feeding the people, but they’re getting educated on sustainable living,” Fatheree said. “If you look at it that way, if in 2030 we reach our goal of 30 million people being fed, we will have fed 30 million people, we will have also educated at least 30 million on sustainable agriculture. The goal would be for those people to at least open their mouth once in those 10 years and said, ‘Hey, this is a cool thing we should be doing, too.’ So it just kind of keeps building on itself, which is our other goal is educational — it’s not just feeding people once but educating people why this is important.”

HATponics offers portable greenhouses designed to feed refugee camps or populations in distress by delivering a functioning farm and offering food in the first 45 days of production. The greenhouses are C-130 deployable and can be delivered anywhere on a month’s notice, Cox said.

“The idea is we could scale those and stack them so that they could 150 to 300 people every day for the rest of their lives,” Cox said. “Using those in areas where despair is what you wake up to, providing a little bit of hope and a little bit of work and a little bit of food changes the way people are with one another. It’s really hard to shoot at somebody when you’ve got a fork in your hand and not an AK-47. However, in our refugee populations, there are a lot of struggles and a lot of obstacles to overcome, and so our most recent successes have been using the portable farm systems in developing areas where small-scale farm systems are being phased out due to large-scale agriculture providers, but at HATponics we believe that all farms are the same.